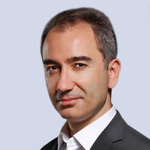 ISTANBUL — The cover of the most recent issue of Dabiq, the slick magazine that the Islamic State distributes online, shows an image of a jihadist fighter with the group’s notorious black flag behind him. He appears to be on the roof of a church, knocking over a cross. Below him, a headline reads, “Break the Cross.”

It might seem at first that the Islamic State was just celebrating its brutal campaign to uproot the Christians of Iraq and Syria. But “break the cross” is not an arbitrary phrase. It refers to a prophecy that will supposedly be realized in the final era before the apocalypse.

This prophecy comes from hadiths, or sayings, attributed to the Prophet Muhammad, a literature that is regarded as less definitive than the Quran, but is still influential in shaping Islamic doctrine. According to certain hadiths, the apocalypse will come in stages. In the first, the world will be filled with injustice, and Muslims will be oppressed. Then two saviors will arise: “the awaited one,” or Mahdi, a divinely guided caliph who will unite and empower Muslims, followed by a bygone prophet who will come back to earth to support the Mahdi and defeat evil. This prophet will not be Muhammad, as one could have expected, but Jesus, praised in the Quran as the Messiah and the “Word of God.”

Many Christians also await the Second Coming of Jesus, so this might sound to them like good news. But Islamic literature seems to suggest that Jesus will return to abolish Christianity and confirm the truth of Islam. A much-quoted hadith, to which the Dabiq headline was alluding, says, “The Son of Mary will soon descend among you as a just ruler; he will break the cross and kill the swine.” The usual interpretation of this prophecy is that when Jesus comes back, he will put an end to his own worship, symbolized by the cross, and re-establish the dietary laws that Christianity abandoned but Jews and Muslims still observe.

Not every Muslim believes such apocalyptic prophecies, most of which don’t exist in the Quran. Most of those who believe in them would also not have any sympathy for the ferocious, brutal Islamic State. Yet Islamic apocalypticism is still a powerful force. According to a 2012 poll by the Pew Research Center, half of Muslims or more in nine Muslim-majority countries believe that the coming of the Mahdi is “imminent,” and could happen in their lifetime. The Islamic State just goes further by claiming that it is bringing the prophecies to life.

Even aside from jihadist violence, Islamic apocalypticism often has negative consequences. When recent history and current events are seen as best explained by prophecies, it becomes difficult to analyze them. Take, for example, the main quandary of the Muslim world for the past two centuries: Why have we moved so far backward compared with the West? The apocalyptic narrative, revived since the 1980s by popular Islamic writers such as the Egyptian Said Ayyub and many of his followers, states that this happened because of the forces of “Dajjal” — Islam’s version of the Antichrist.

If the Dajjal is to blame for the Muslim world’s bleak situation, then only divinely guided saviors can find a way out. This belief discourages pursuing the real solutions to the gap between the Islamic world and the West: science, economic development and liberal democracy.

Muslims — and perhaps other apocalyptic believers as well — should see that obsession with prophecies might cost them not just rationality, but also a very fundamental value of their own faith: humility. Because to assert that we are at the end of times means that we are quite special. We are not merely one of the countless generations that God has created. We are the chosen few, at the apex of history. It is really not piety that underlies this conviction; it is vanity.

Muslims should also consider that the prophecies about end times might be better read metaphorically. This could help us open our minds, rather than closing them. The 19th-century Islamic scholar Muhammad Abduh, for example, argued that Jesus’s Second Coming was a metaphor for reform within Islam. Just like the conservative Jews at the time of Jesus, Abduh observed, conservative Muslims of today are often too rigid with the letter of the law, but unmindful of its spirit and the moral purposes. Abduh argued that Muslims need a “Messiah-oriented renewal” focusing on “mercy, love and peace.” His vision was focused not on “breaking the cross,” but on repairing the crescent.

Muslims can understand Jesus’s Second Coming in the horrifying way of the Islamic State or the inspiring way of Abduh. That is because religious texts come to life at the hands of men. And it makes a great difference whether the believers’ purpose is to self-righteously sharpen their blades against others, or to humbly educate and enlighten themselves.

One thought on “Mustafa Akyol: The Problem With the Islamic Apocalypse”